Last summer, I gained my first real exposure to 3D printing when I did work for a mechanical engineering professor in New York City. I worked with a Computer-Aided Design (CAD) software called NX to build a large molecular protein model for research purposes. 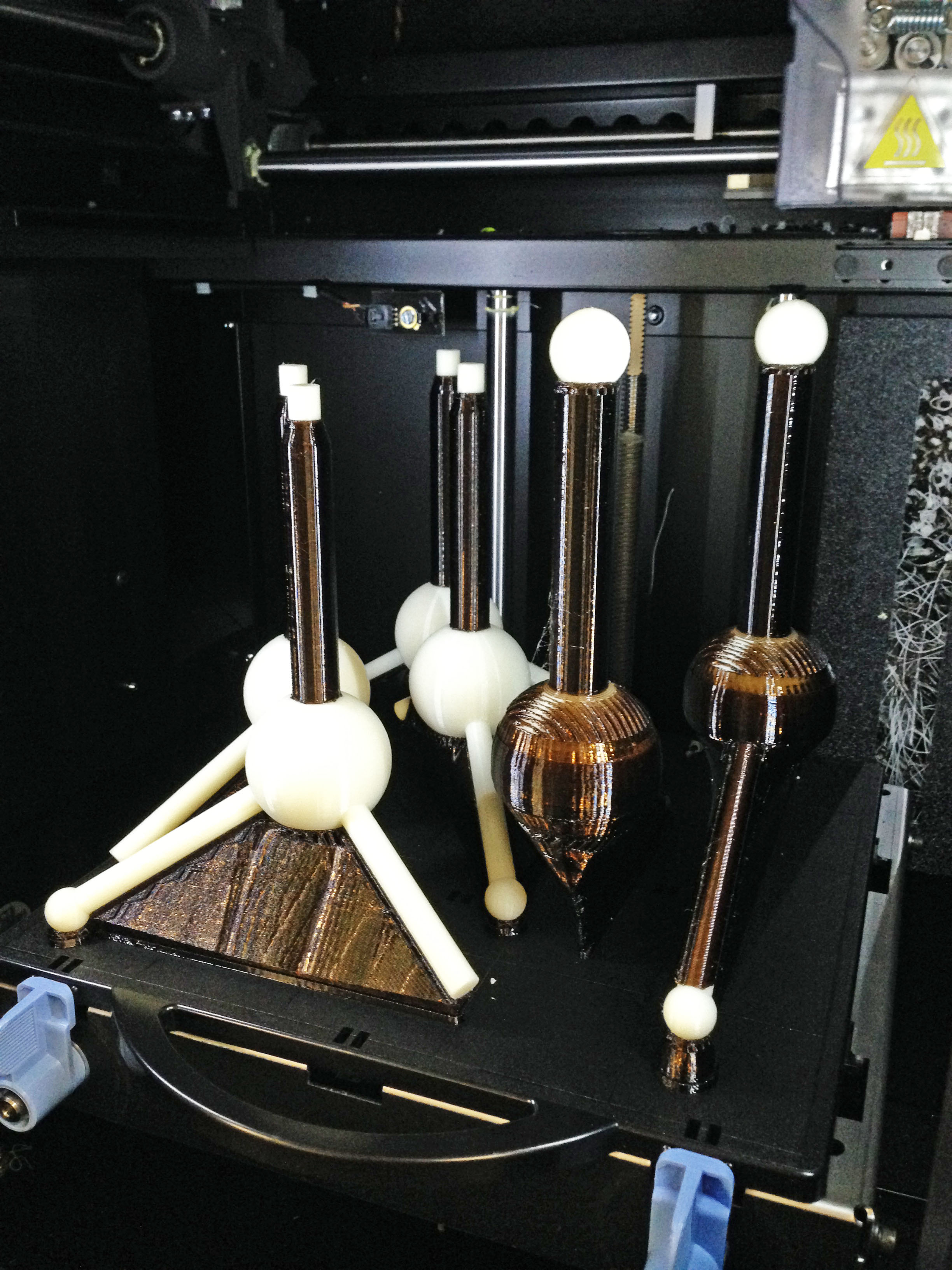 I took this picture after a batch of protein parts finished printing. They're still sitting in the 3D printer chamber with a coating of dissolvable filament (the dark material) meant for support. The printer worked in thin horizontal layers of plastic, which was a slow but accurate process. This batch took around 20 hours to print.

The parts were printed from stereolithography (STL) files that I uploaded to the user interface of the printer. An STL file can be exported by CAD software and then processed by a 3D printer. You can specify the scaling, positioning, and density of the parts before 3D printing the object.

This particular 3D printer model produced parts using one color at a time. The protein model started with white plastic, which eventually ran out. We had to replace the empty cartridge with yellow plastic as it happened to be lying around. However, there are printers out there that are fully capable of printing parts with multiple colors. In fact, one company called Doob sells 3D-printed figurines of real people. You can actually book an appointment to be scanned and they'll print a miniature version of you with some pretty accurate coloring.

There are also companies that sell 3D printing technology that is more accessible to the public. The one I used was commercial grade, but companies like MakerBot sell 3D printers that are desktop-sized. As 3D printing becomes more mainstream, people will be able to print all sorts of objects that are both useful and creative. MakerBot already has a community and database of printable "things" called the Thingiverse. Over 100,000 3D models have been uploaded. 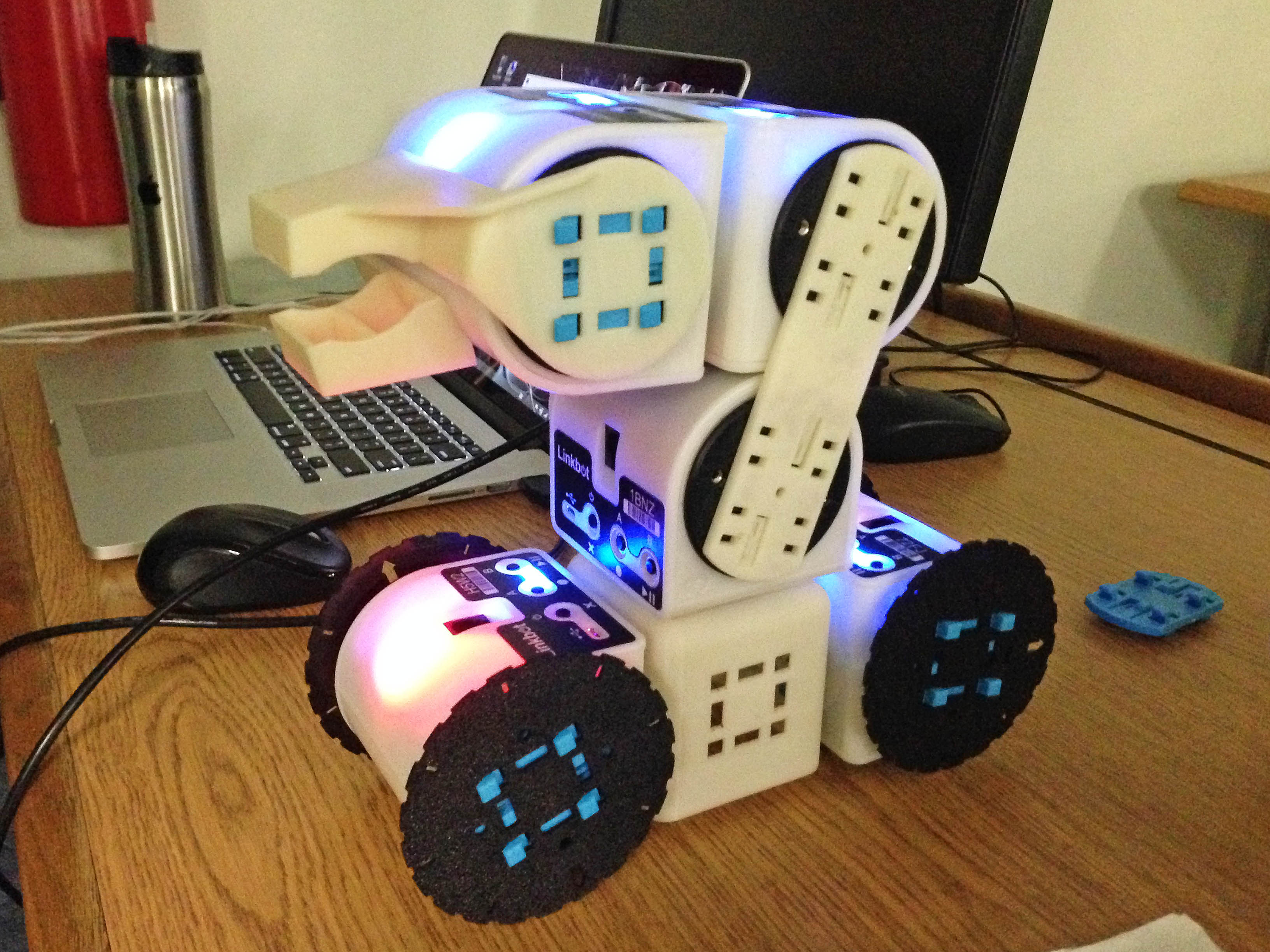 While I worked on the molecular protein project, I also played around with Linkbot motors from an educational robotics company called Barobo. It turns out that the connective parts of the Linkbots are all 3D printable. The company website has a listing of parts that can be interlocked with the rotating motors. It's as simple as downloading a file and printing it, which saves a lot of time that would otherwise be needed to order robot parts.

The Linkbots connected to my computer via Bluetooth where I was able to control the rotational velocity of the motors. This was accomplished by a few simple Python scripts to program a set of instructions. There was a surprisingly large amount of motions attainable by the rotational motors alone. With the claw attached at the top, the robot could move around and pick up small objects, like napkins and cups.

I'm working on a medical device project now as a researcher and developer. It involves designing an assisitve glove for paralysis/stroke patients to aid in everyday tasks. Our first goal is to provide a gripping mechanism; while lacking control of the hands, it's difficult to accomplish many vital tasks, such as gripping a fork, without the aid of another person. I have two designs in mind: the first is purely mechanical and the second relies on electrical stimuli.

At this stage, I'm still researching devices that are already out there while thinking about prototyping my own designs. Check out some of these medical and assistive companies. A gripping device needs to be able to function assuming that the hand muscles are not receiving biopotential signals from the brain, which are responsible for muscle contraction. This is where I can combine mechanical design with robotics. We'll need a robotic glove with a claw-like system responsible for the grip action controlled by a microprocessor located along the back side. But the glove also needs to be lightweight and convenient for simple tasks. I'm developing a string model that moves the fingers via a push-pull mechanism controlled by a motor on the wrist. Once I draft the design into CAD software, we'll be able to start 3D printing parts for preliminary testing. This design needs minimal microprocessor signaling; in fact, we may even be able to avoid a microprocessor altogether and simply control the motor by the push of a button. However, the other design will rely heavily on these types of signals.

The electrical stimuli model will create artificial biopotentials, which is another challenge entirely. Many complications arise when when we think about using electricity to control the body, such as safety hazards and power consumption. Yet this method aims to fix the underlying problem at hand, which is the lack of signaling to communicate with the hand muscles. An efficient implementation may lead to full control over individual fingers for the patient. This will be an on-going project requiring heavy research and testing while we first focus on prototyping the mechanical glove model.